Drying faster and further than nature? 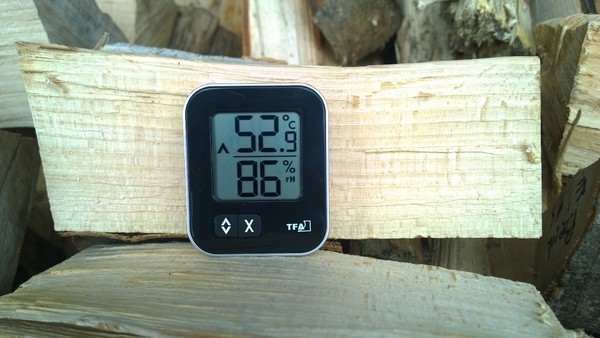 For centuries if not millennia wood has been gathered and burnt so families can stay warm. If the practice has remained essentially the same over all that time, so too have the methods of drying the timber. Trees are brought down, cut up and left to season in the wind and sun.
The traditional drying process works which is why it has lasted so long. But you have to think with advances in technology, there has to be a better way. That’s where the electric kiln comes in. It is effective but most people will not have access to one. Kiln dried logs are available however if you can afford the price.
The alternative is the solar kiln. It works in countries which have hot summers but up to recently I haven’t seen evidence that it can be effective in our generally damp and cloudy climate.
At this stage I am not claiming success for the device I have had built for me but the evidence so far is encouraging. On Sunday the temperature in the kiln reached almost 53 degrees Celsius.
Beech logs placed in the kiln three weeks ago have now lost 28% of their weight. That is pretty much all water. By contrast similar beech logs left outside for the same length of time have shed 21% of their weight. Without doubt the kiln is drying faster than the sun and wind.
But here’s an interesting point. The wood outside only decreased in weight in the past week by 2.2%. The wood in the kiln reduced by 3.8%. Similarly the wood which has been drying in the kiln for four weeks lost 3.4% in the past week, while the blocks outside lost 2.5%. Despite being significantly drier at the start of the week, the wood in the kiln lost more water than the wood outside.
The evidence suggests that the drying process both inside and outside is beginning to peter out but I suspect, and the science supports it, that by the time the various batches of wood are shedding no more water, the blocks inside the kiln will have significantly lower moisture levels than the blocks in the open air. In other words the kiln looks as if it can dry faster and further than nature.

By the way the relative humidity in the kiln would not have been 86% when the temperature hit 53 degrees. That would have been at night.