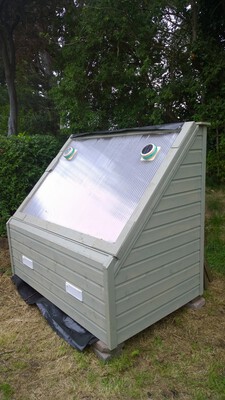 My plan to lower the cost of drying firewood has taken another step forward. I’ve been awarded an Innovation Voucher by Invest NI to develop designs for a solar kiln. These devices are used in the United States to season timber but are not much in evidence here.

If you’ve been following the story of the solar kiln I have already commissioned, you’ll know that during the summer I tried to find out if it could dry wood faster and to a greater degree than could be achieved by simply leaving the blocks of wood out in the open air.

The results were so encouraging even in this dreary climate that I decided to apply for a grant to see how the solar kiln can be made more efficient and eventually produced at a price that would be attractive to homeowners with a wood burning stove who need supplies of timber dried to a high degree.

As I say I was successful in getting the support of Invest NI. The money allocated will be used to fund research work which will be carried out by the South West College InnoTech Centre based in Cookstown.

The prototype built and operating here in my back garden is based on equipment used in the States. Already I can see how by modifying the design, I should in theory be able to make it much more efficient.

A further development which will be informed by the work being carried out at the College will be the creation of a version of the kiln which can be sold in flat pack form in order to enable greater sales. This may prove a bigger challenge than building a more effective drier.

I will be posting results of the work here. So if you’re interested, then keep a watching eye on my tweets.