Encouraging signs from the kiln 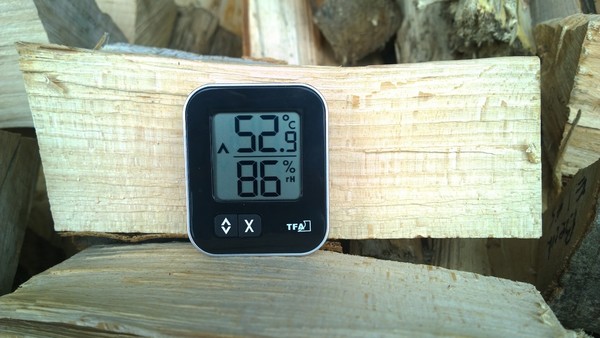 The recent hot, sunny weather is helping to drive the performance of the solar kiln. A couple of days ago the temperature in the kiln almost reached 48 degrees Celsius. Today it topped 43 degrees

On Monday I will report on how the blocks of wood are drying out by reference to the change in their weights over the previous seven days. But even today with two days to go I can see evidence the kiln is working.
I weighed four different blocks, two which have been almost a fortnight and two almost a week. They would have had similar levels of moisture when left in initially.
The two blocks which had been drying for just five days had lost over 15% of their weight while the two that had already been in for a week lost over 10%, again over just a five day period. I do not know how much water the latter two lost since being first inserted because I only started weighing the blocks last Monday.
But assuming the initial rate of water loss is 15% which then falls off to 10%, that would make the weight reduction over a two week period around 25%,
We will see if those figures are replicated when the other blocks are weighed. And whether this weight loss can be sustained. Over the next few days conditions look far more unsettled and the temperatures are forecast to be significantly lower.  But for now it all looks encouraging.