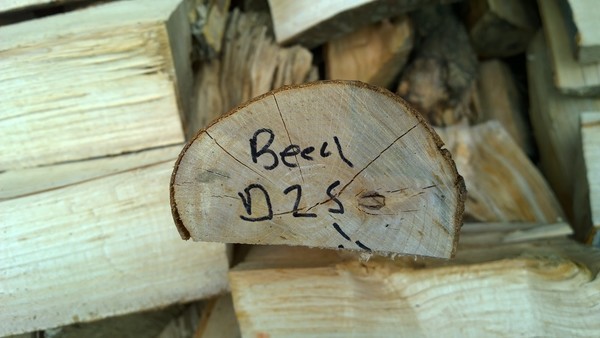 The weather has been so bad in the past week I have been tempted to write off the whole seven days completely and ignore what has or more likely has not been happening in the kiln. But then the sun came out today and the temperature in the kiln reached over 50 degrees Celsius giving me hope that the drying process has been able to continue albeit very slowly.
We will see tomorrow when I weigh the blocks just what progress has been made. It will be as I say quite limited but in truth even if the conditions were better, the wood at this stage would be shedding water at a much lower rate. That’s because of a a factor called the equilibrium moisture content or EMC. Wood absorbs or releases water depending on how warm and damp the air is around it. More scientifically speaking, the moisture content of the wood in percentage terms will over time without intervention by man be determined by the temperature and relative humidity of the surrounding atmosphere. To put it more simply the water content reaches its own level.
The Forestry Service of the US Department of Agriculture, of all organisations, has published tables listing EMC figures for wood for different weather conditions. Not only that it helpfully spells out EMC levels for Dublin during different months of the year. Not for Belfast however. The EMC of wood in Dublin peaks at 18.5% in December and bottoms out at 15.2% in May.
Effectively what this means is that wood left in open air in winter but protected from the rain will not have a moisture level below 18% while wood in similar conditions in the summer will not have a moisture level below 15% no matter how long it has been seasoned.
The EMC sets the boundaries for the drying of the wood and without some form of kiln there’s not a lot you can do about that. But there’s more to it than that. The level at which the moisture is shed is dependent on the moisture level itself. That implies that the lower the moisture level, the lower the rate the moisture is driven off given the same weather conditions. That’s why I say that even had the weather been better, the wood would have drying off at a lower rate.
This could all be explained more concisely with mathematical equations but I’m not sure that would in the end be very useful.
The more important information is not just that the temperature in the kiln remains higher than the surrounding atmosphere, during the day at least, but that the relative humidity remains lower. Which is why the wood in the kiln has been and will continue to dry faster than wood left outside.
The one advantage wood in the open air has and that is that is exposed to the drying effects of the wind but that factor alone is not enough to outweigh the disadvantages of lower temperatures and higher relative humidity levels